Professor Richard Somerville is a renowned climate scientist. He was a coordinating lead author for the IPCC’s Fourth Assessment Report in 2007, and continues to teach, write, and speak forcefully about climate change.

Prof. Somerville recommends using what he nicknamed the Ski Slope graph to communicate about the time-sensitivity of reducing greenhouse gas emissions. To read the graph, shown below, we need to know that because CO2 takes centuries to disappear from the atmosphere the warming effects of the CO2 humanity is adding to the air do not depend on when it was added. Quickly adding a lot of CO2 and then stopping is the same as adding only a little at a time over many years (assuming the total amount of CO2 emitted is the same in both cases). For the world to have about a 67% chance of limiting global warming to 2° C. or less, mankind must limit total future emission of CO2 into the atmosphere to a specified amount (roughly 565 gigatons). It doesn’t matter if this amount of CO2 is emitted rapidly or slowly; what matters is the total we end up adding to the atmosphere.

The areas under the three curves shown in the graph (green, blue, and red) are the same, and in each case that area represents the maximum CO2 we can emit (about 565 gigatons) to have a reasonable chance to limit global warming to 2° C. What the steepness of the curves shows is that the sooner mankind starts to limit emissions the more gradually we can cut back, and the longer mankind waits the more rapidly we will need to reduce emissions. 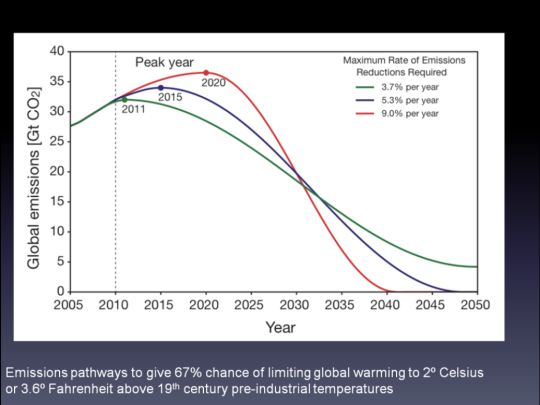 Professor Somerville calls these three curves the bunny or beginner slope, the intermediate slope, and the double black diamond (expert) slope. Mankind has missed the opportunity to use the more gradual bunny slope. We are soon going to miss the opportunity to use the intermediate slope. That will leave us with only the expert slope, or with even worse choices like not cutting emissions at all.

To better understand what these curves mean for the world, the blue curve – a 5.3% annual reduction starting in 2015 – means reducing global greenhouse gas emissions by 50% in just 13 years, by 2028. The red curve – a 9.0% reduction annually, but starting in 2020 rather than 2015 – means humanity would need to reduce global emissions by 50% in only about 8 years, again by 2028. For the world to successfully carry out either strategy would be challenging, but the second approach would be more difficult. It would mean jamming on the global emissions brakes fast and hard and rapidly screeching to a stop.

Research studies demonstrate that reading any but the simplest graphs is challenging for young people – and for adults, too. We can assume, for example, that few people are able to look at the Ski Slope graph and fully understand it without help. Graphs may communicate a great deal of information concisely and elegantly, but often they do not speak for themselves. Nonetheless Professor Somerville says he finds that many legislative aides, who are not typically scientists, can understand the urgency illustrated by the Ski Slope graph, which makes it a valuable communication tool.

A group of us at The Concord Consortium, where I worked for nine years, developed a new approach to help middle school students better understand graphs (less complex graphs than the one above). We tested the new approach in dozens of classrooms, and a middle school journal published by the National Science Teachers Association, Science Scope, is showcasing our work in its February 2015 issue.

When you look at the Ski Slope graph, where can you find hope? One important answer is that no matter which year humanity finally begins reducing greenhouse gas emissions we know that sooner is better than later. So let’s begin!